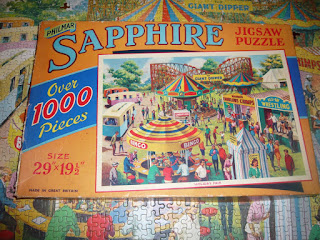 ...doing this jigsaw.  Last Wednesday, we came home from playgroup and I wanted to make a jigsaw.  We chose this one from the collection (of 4...I'm really not jigsaw crazy) and set about it.  My daughter was keen to help so we picked out all the pieces with writing on them until 10 minutes had passed and she informed me her arms were "too sore" to help any more.  She told her granny that we had been doing a jigsaw with "nearly one million pieces."  I guess that over 1000 is a lot more than her usual 64.

After burning a few bottles of midnight oil, voila!  A completed jigsaw!  Well, almost.  There was a note inside the box which told me that there were two half pieces missing and, sadly, another seems to have gone missing since then.  Still, it was such a nice jigsaw that I didn't let it put me off.  I even put it back in the box and added a bit of information to the note, in French, to update the situation for the next person who tackles it.

The jigsaw looks like a family heirloom, but it came from a charity shop which gives jigsaws away for free.  So it'll probably go back there at the weekend to replenish the ether, even though I need jigsaw pieces for a craft project I've got planned.  I'll hopefully get one I don't like so much.  A thatched cottage perhaps, or Scottish mountains or something with a lot more missing pieces...
Labels: charity shops